15 Advantages and Disadvantages of Virtualization

Virtualization is a process that started in the 1960s when the machine resources of some of the earliest mainframe computers were split to operate on various applications at once.

Virtualization happens when a virtual version of something is developed instead of an actual version.  This may include storage devices, networks, operating systems, or even servers, with modern virtualization.

Virtualization has since spread virtually into every form of digital life. Many individuals take advantage of what virtualization can do, from virtual machines that function like real computers to console emulation.

Advantages And Disadvantages Of Virtualization

Virtualization has opened many opportunities for the people in each and every corner of the world, exploring the infinite world of technology where everything was possible sitting at one place. Organizations are looking forward to extreme utilization of virtualization from its core.

Yet, virtualization can be the problem as it is cloud-dependent and sometimes even the servers need time to fix the problem. 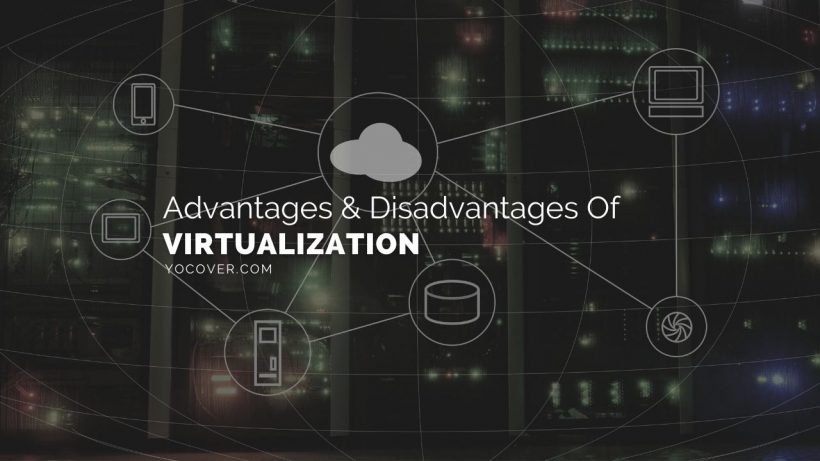 There are advantages and disadvantages of virtualization that must be addressed before a device or strategy is completely implemented for the organization.

Many IT companies are moving forth towards virtualization with keen interest. The involvement of the cloud is one of the major advantages of virtualization for remote working platforms.

Since virtualization doesn’t require the use or installation of actual hardware parts, IT infrastructures find it to be a cheaper method to implement.

To build an on-site resource, there is no longer a need to devote vast areas of space and significant monetary investments. As if the hardware is built locally, we need the license or the access from a third-party vendor and start operating.

Virtualization also allows the hardware and software to be automatically upgraded by downloading it on your third-party provider.

It allows IT professionals to handle the issue without hiring professionals and saving money. In addition to that, virtualization decreases the resource management burden to promote virtual environment efficiencies.

When the servers are virtualized, disaster recovery is very easy with instant retribution of backup and up-to-date snapshots of your virtual machines. Virtualization made it possible for organizations to build an inexpensive replication site more easily.

You can still move such virtual machines somewhere into a cloud provider if a tragedy strikes in the data center or server room itself.

Getting the versatility level ensures that it would be easier to enact the disaster recovery plan and would have a 99 percent success rate.

When using virtualization technologies, deploying resources is considerably quicker. It is possible to greatly save time spent on building local networks or setting up physical devices.

Thus at least a single connection to the virtual world is the only thing you need. And the implementation of virtual machines is often easier than installing physical models.

Digital entrepreneurship was nearly impossible for the average individual until virtualization occurred on a large scale.

Almost anyone can start their own side hustle or become a business owner, thanks to the numerous networks, servers, and storage devices that are available today. Sites such as Fiverr and UpWork enable everyone to set up a shingle and begin to find some work to do.

Virtualization is an energy-efficient method for both people and companies. Since there are no local hardware or software options being used, rates of energy consumption can be minimized.

Instead of paying for a data center’s cooling costs and equipment operational costs, funds can be used over time for other operational expenditures to increase the overall ROI of virtualization.

Uptime has risen significantly, thanks to virtualization technologies. Some providers have an uptime of 99.9999 %. At 99.99 percent today, even budget-friendly providers offer uptime.

Because third-party vendors usually provide options for virtualization, people and businesses can have predictable costs for their IT needs.

For example, at the time of writing, the cost of a Dell PowerEdge T330 Tower Server is $1,279 direct from the producer. In contrast, Bluehost Web Hosting’s services can be a sluggish $2.95 per month.

Virtualization has solved many complex dimensions that digital technology had to explore. But, yet the small but the major issues are still detected in virtualization. So, there are many disadvantages of virtualization stated below.

The cost would be very low for the average person or organization when virtualization is considered. However, the implementation costs can be very high for the suppliers in a virtualization environment.

At some point, hardware and software are needed, implying that devices must be either produced, manufactured, or bought for implementation.

There are many limitations of virtualization. Every server and application out there is not compatible with virtualization. The virtualized solutions would therefore not be supported by some of the organizations’ IT infrastructure.

In addition, there are several vendors that have stopped supporting them. It requires a hybrid method to solve these needs of individuals and organizations.

Another significant aspect of an organization is availability. The data needs to be linked for an extended period of time. If not, the company would lose competitiveness in the market.

Availability issues can be considered as the disadvantages of virtualization where every document from and for the client is critical for a service provider.

The servers for virtualization appear to go offline. The websites that are hosted would also be ineffective. The third-party providers are solely in charge of this, there is nothing that the user can do about it.

While you save time during virtualization implementation processes, as compared to local systems, it costs users time over the long run. That is because to achieve the desired outcome, there are additional steps that must be taken.

Our modern currency is information. You can make money if you’ve got it. You’ll be forgotten if you don’t have it. Since information is critical to a company’s success, it is often targeted.

In 2017, the total cost of a data security breach was $3.62 million, according to a study released by the Ponemon Institute.

For perspective: There are around 1 in a million chances of being hit by lightning. The likelihood of suffering a data breach when virtualization is used? 1 of 4.

Although thanks to virtualization, you can grow a company or opportunity quickly, however, you will not be able to become as big as you would like.

Because several organizations share the same resources, growth in a virtualization network causes a lag. One large presence could steal away capital from other smaller companies and there would be little that anyone could do about it.

7. Several Links Must Work Together

If you have local machinery, then you have total control of what you can do. You lose power with virtualization since many ties must work together to accomplish the same task. Let’s use an example of a document file being saved.

You can save the file instantly using a local storage device, such as a flash drive or HDD, and even build a backup. The ISP connection will need to be valid using virtualization.

It will need your LAN or Wi-Fi to function. You’d need to have your online storage option available. If any of those don’t work, then the file won’t be saved.

Hence, all these advantages and disadvantages of virtualization explain what are the benefits that can be gained as well as the demerits which might be a problem in some cases.

As the world of technology is upgrading itself rapidly, many more breakthroughs along with complications will appear in the future.