10 Best Jewish Comedians Of All Time

The ability to make others laugh uncontrollably is truly special. A good joke must be relatable, engaging, and well-timed at all times. In comedy, timing is everything. Throughout history, the planet has created various comedians who have made people gasp for air with laughter. A large number of comedians are of Jewish origin among these well-known figures.

Comedy is all that Jews excel at. Humor is one of the critical attributes that four out of ten of the nation’s 5.3 million religious and cultural Jews believe is important to their Jewish identity, according to a 2013 Pew Research Center study, “Portrait of Jewish Americans.”

From the well-known Woody Allen to the funny Joan Rivers to the famous Larry David, they all have one thing in common: Jewish roots. Some of today’s comedians, including Adam Sandler, Seth Rogan, Andy Samberg, and Sarah Silverman, come from Jewish backgrounds. We are confident that you will be surprised by the full list of Jewish comedians. Have a look at these 10 best Jewish comedians of all time: 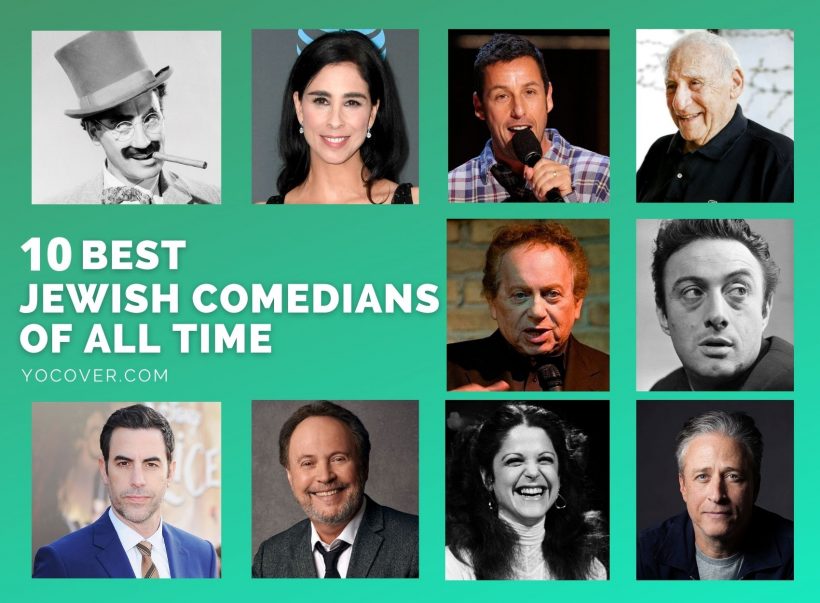 America’s most popular political satirist, Jonathan Stuart Leibowitz, is also a crossword puzzle fanatic. He also used a customized puzzle developed with the aid of The New York Times’ crossword editor to propose to his future wife, a shicksa (Yiddish for a female non-Jew). Who says being the host of a cable talk show doesn’t come with its own set of benefits? Jon Stewart is considered one of the best Jewish comedians of all time.

Born Yacov Moshe Maza, this famously outspoken comedian never shied away from controversy. He was banned from The Ed Sullivan Show in 1964 after reportedly giving the host the finger during a live broadcast. Mason’s career took nearly a decade to recover after Sullivan’s weekly variety show became the most successful show on television at the time. He struggled and paid the price but yet he is considered one of the best Jewish comedians of all time.

The most famous Marx’s brother, Julius Henry Marx, will still be remembered for his thick greasepaint mustache, which has been parodied in numerous films and television shows. According to legend, the mustache began when a young performer didn’t have time to paste on a fake one during a vaudeville show. Prior to presenting You Bet Your Life, he grew a real mustache, which he kept for the rest of his life.

She’s been called the “female Lenny Bruce” by some. But to those nearest to her, she’s simply Sarah. After her first year as a writer/performer on Saturday Night Live, Silverman was fired via fax and went on to stand-up comedy. Her on-stage character as a naive yet bigoted Jewish girl allows her to break the mold with jokes like, “Of course, the best time to get pregnant is when you’re a black teenager.”

Mel Brooks, born Melvin Kaminsky, began his career as a comedy writer for Sid Caesar’s Your Show of Shows, much like Woody Allen. He went on to write, direct, and star in some of the most well-known comedies of the last half-century, including 1981’s History of the World Part I, which led up to the unlikely dance hit “It’s Good to Be King.”

The multitalented and charming Adam Sandler is considered one of the best Jewish comedians of all time. Adam Sandler is no stranger to the story of a former Israeli assassin who fakes his own death to pursue a career as a hairdresser in You Don’t Mess with the Zohan. The actor once knew a hairstylist and former Israeli soldier who inspired the character.

Despite the fact that Adam Sandler is an outspoken supporter of Israel, and even though You Don’t Mess with the Zohan is set in Israel, the production barely set foot in the Holy Land. In Tel Aviv, just one exterior shot was shot. The scene in which Sandler appears was filmed in Mexico.

Gilda Radner’s without any question makes it to the list of best Jewish comedians of all time. On the first season of Saturday Night Live, the Detroit native became famous as one of the original “Not Ready for Prime-Time Players.” Radner produced such unforgettable characters as Roseanne Roseannadanna, Baba Wawa, and Rhonda Weiss, the “Jewish American Princess,” during her five-year run on the show.

Radner had a brief fling with fellow SNL castmate Bill Murray, but few specifics were made public at the time. In her autobiography: It’s Always Something, she recounts the details of the broken relationship.

In March 2008, Billy Crystal, a lifelong Yankees fan, signed a one-day minor league deal with the team and played in a spring training game against the Pittsburgh Pirates. In his only at-bat, Crystal struck out, but he did manage to foul off a pair of fastballs. Do you think his teammates teased him for wearing a Mets cap in City Slickers?

Sacha Baron Cohen, a Cambridge University graduate, wrote his thesis on Jewish participation in the American Civil Rights movement and often compared his own Jewish ancestry with his Borat character, an anti-Semitic Kazakh reporter. For example, in the Borat film, the character does not speak Kazakh as one would expect, but rather Hebrew, which Cohen speaks fluently. He has shown the talent is accepted by the viewers making him one of the best Jewish comedians of all time.

His time’s most lewd comic featured a wide range of topics, but mostly anything considered inappropriate. Lenny Bruce, born Leonard Alfred Schneider, was never far from scandal, and he was arrested several times for obscenity charges during his career. Nearly every nightclub in the country had blacklisted Bruce by the time he died of a drug overdose in 1966. He’s had a revival in recent years, and in 2003 he received the first posthumous pardon in New York history.

This is the list of the 10 best Jewish comedians of all time. Here we have included the names that have made us laugh through the long period of time with some unseen faces. These talents are to be acknowledged and appreciated.