German shepherds are noble associates and family protectors if provided with proper training and accustomed to socialization. They are perfect for an active household environment.

German Shepherd is friendly, playful, aloof, and anxious. They are known as good hiking companions, cold weather tolerant, apartment-friendly, and easy to train.

They are considered as of the smartest dog breeds in the world. The discernment and elegance in their behavior are some of the amazing facts about German Shepherds.

German Shepherd’s standard height is 60-65 cm at withers for males and 55-60 cm for females, and they are 55-65 cm long. They weigh around 50-90 pounds, and the standard weight range is not determined.

They have a long muzzle, pointed ears, and square heads. They have long bushy tails with slightly angled hind and back legs. The ears are often pulled back during movement and stand parallel.

They have a long neck that they raise when excited and lower while stalking and moving fast. They are confident, courageous, intelligent, and obedient breeds, making them the second most popular dog breed in America.

There are mainly two types of German Shepherd, German and American, whereas German bloodlines produce heavier dogs with straight legs and backs and longer coats.

German Shepherd’s facts include a decorated history connection to WWI and WWII. German Shepard is a common name for German Shepherd Dog and is also known as Alsatian in England and Ireland.

These large dogs are faithful and loyal guardians of their family but may act strange against some strangers. If given proper training dogs and horses are one of the fast learning animals.

The German Shepherd Dog is a medium to large-sized breed well known for its beauty and skills. They are widely used for scouting and security.

Their tough physique and high intelligence make them ideal for various roles such as disability assistance, search-and-rescue, police and military jobs, and acting. 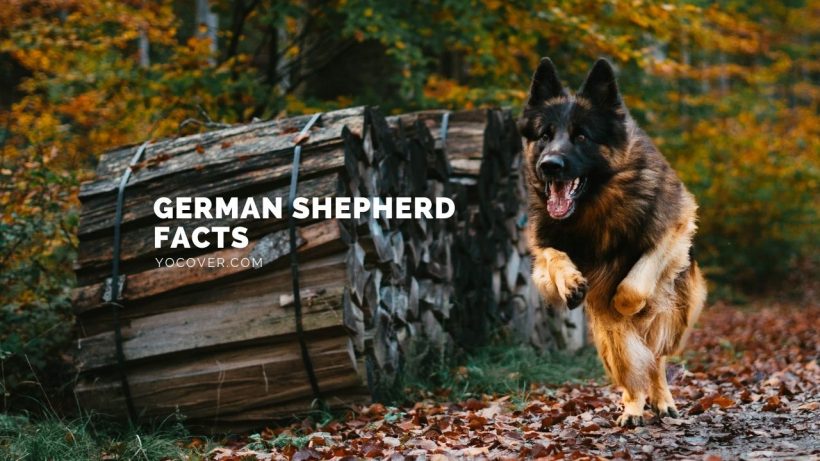 A German shepherd is quite active and likes to have something to do. They need jobs, challenging ones, to thrive. Here are some interesting facts about German Shepherds.

Undoubtedly, the German Shepherd Dog is among the most popular Breedbreed in the world. It ranks number 2 out of 193 breeds recognized by the AKC and has been consistently ranked in the Top 5 breeds over the past few years.

It is the most registered dog breed around the world after Labrador Retriever. It is smart and very easy to train. German Shepard dogs are often used as working dogs.

Dog lovers adore the loyal nature of this breed as it makes them fantastic pets. There are around 9.8 million GSD all around the world, their popularity can be measured by glancing at facts about German Shepherds.

2. Max von Stephanitz is known as the father of GSD

In 1899, breeder Max von Stephanitz noticed a wolf-like dog with black and yellow markings at Dog show in Western Germany. He was greatly impressed by the dog’s intelligence and loyalty.

He started the German Shepherd Dog Club and set up guidelines for the Breed’sbreed’s standard. He then began to standardize a breed of shepherd dogs.

Max von Stephanitz is the reason the German Shepherd is used worldwide as a world-class working dog.

3. They are very smart

GSD are best known for their intelligence. German Shepherd Dog ranked Number 3 out of 138 breeds.

Dogs within this rank were found to need less than five repetitions of a new command before they understood it.

They follow the first command given to them 95 percent of the time. Because of their high-level intelligence, they are suitable for various jobs such as search and rescue, military and police jobs, and acting.

The German Shepherd is a well-proportioned dog. The head is broad, the nose is most often black, and the tail is bushy. Ears are large and stand erect.

Their coat is thick and rough and comes in a range of colors. They come in colors such as black and tan, sable, all black and all white. The pure-black, pure-white, liver, sliver, and panda are among the rare color combination.

5. GSD has many names

German Shepherd dog is most commonly referred to as the German Shepherd. The word dog is included to distinguish the dog from humans who work as shepherds in Germany.

After the world wars, anything related to Germany was being ignored. American Kennel Club called them shepherd dogs, to solve this issue until 1977. Still, some people refer to it as Alsatians to this day.

6. German Shepherds were used in WWI and WWII

German Shepherds have been used in a variety of working capacities throughout history. They were used by armed forces in World War I and used by German forces and allied forces.

The military trained the German Shepherds on how to parachute from an aircraft. The high level of intelligence made it most suitable for military services.

The dog also served as an anti-tank weapon, messenger, explosive detection, and search and rescue. These German Shepherd facts are remarkable and alluring. These are the courageous facts about German Shepherds.

German Shepherd Dog is classified as a large dog breed. They are very muscular and have a great physique.

The average adult male weighs around 66 to 88 pounds, while the female weighs approximately 49 to 70 pounds.

8. Commonly used as a police dog

German shepherd dogs are loyal, intelligent, and brave. They also have a good sense of smell. These traits make them ideal for police jobs within the police force.

German shepherds are used to track criminals, search and rescue missions, detect explosives, search for drugs, and cadaver searching. Being used in national security is one of the surprising facts about German Shepherds.

German Shepherd is quick learners and fit to any role you want them to. They are also used for herding sheep and cows; still, this role is given to these breeds.

They are also used as security guard dogs for personal, business, or critical government premises. There are many circumstances when these dogs have shown their capability.

The reliability and faithfulness the owner or trainee has in them are one of the cheering facts about German Shepherds. Among the dog breeds, Beagles are also one of the hard-working dogs.

10. The German Shepherd has a powerful bite

The German Shepherd’s bite can be brutal and inflict severe injuries. German shepherds bite has a force of around 1600 newtons. Sometimes the bite can be so fierce that it might require surgery.

German Shepherd puppies must be taught to hinder their bite. A bite can be painful if they are not trained to bite with low pressure in human skin during puppyhood.

11. Known for its love and loyalty

German Shepherd loves their owner, child, and babies but isn’t much friendly with strangers. However, with proper training and socialization, they can be taught to act nice around new people.

This is the reason why a properly trained and socialized German Shepherd isn’t aggressive with strangers. They can do anything for their owners.

Even GSD pets who have no formal training love to protect their owners and sometimes even rescue them. Loyalty is in their blood. A German Shepherd called Rambo saved his owner’s life when he was struck by lightning.

Rambo lost his life protecting Hardman. German Shepherd doesn’t hesitate to defend its owner and is unwaveringly loyal to its owners.

This sense of loyalty or responsibility is one of the amazing facts about German Shepherds.

12. The German Shepherds can learn in five repetitions

German Shepherds are smarter and easier to train, but with patience and authority. They can easily be manipulated whenever they hear or receive any vibes.

The amazing facts about German Shepherds include their ability to grasp and learn anything new in five repetitions. Most dogs can be trained faster when adults, but the proper age for training is “as soon as possible.”

A German Shepherd puppy is a wonderful partner for your family. The aroma of your house will be cheerful, and they show their intelligence and loyalty from the beginning.

They require training and socialization from their puppyhood; adapting to the new environment and people will make it easier. It will enhance their capability and instinct.

Before reaching maturity at around two to three years of age, a German Shepherd puppy has to experience several significant behavioral changes and development stages.

These facts about German Shepherds state how they can be molded into the loyal, and faithful companion of your family.

Max von Stephanitz first bred these dogs in 1989; there are five varieties of a German Shepherd.

There are 11 recognized colors of German Shepherd within these five varieties, tan and black being the most common color.

Crossbreeding, gene recession and any other health issues are not the cause of the coloration. Black German Shepherds are the most desired and expensive breed.

The physical appearance and characteristics of a black German Shepherd are similar to other GSD. But they grow with the same physique and size as a purebred German Shepherd.

They are known as the largest breed and can still run close to 50 km/hr at best. Looking at the 72 km/hr by Greyhound, it seems nothing.

But considering the weight, it’s very impressive, where Usain Bolt can run up to 43 km/hr.

Rin Tin Tin was a German Shepherd rescued by US Army during WW I. The rescuer trained that dog to work in films and starred in 27 movies.

Rin Tin Tin was considered the biggest star of the breed. Rin Tin Tin died in 1932 at the age of 14. The entertaining facts about German Shepherds include their involvement in movie industry.

Strongheart is another German shepherd who was originally trained as a police dog. Strongheart starred in six films and died in 1929 from an accident in the film studio.

Shepsky is the cross between the German Shepherd and Siberian Husky. They are medium-sized crossbreeds, inheriting both genes from their parents.

They are persuasive and loyal and are classified as working dogs. They are given the name the Gerberian Shepsky.

German Shepherds are susceptible to degenerative myelopathy. It is an injury to the spinal cord due to severe compression, congenital stenosis, or disc herniation.

This spin-related disease is particularly common among German Shepherd dogs, as they are genome-related. The saliva of the dog is taken to examine this condition.

Many buyers ask the breeder to do this test before agreeing to buy. Von Willebrand disease and exocrine pancreatic insufficiency are among other diseases they suffer from.

There are certain health conditions dogs suffer depending on their breed. German Shepherds develop orthopedic conditions due to their genetic makeup while inbreeding.

German Shepherds are prone to osteoarthritis and Cauda equina syndrome, which causes pain and disability for dogs.

They should be given enough calcium to keep them away from these problems with equal attention and care. Most of the owners are unaware of these facts about German Shepherds.

21. Over-aggressive if not socially exposed.

German Shepherds may react fervent or even over-aggressive if not properly handled. These dogs are ideal working dogs and take their duty with pride. Socialization is the major issue with GSD when they meet new people and animals.

This breed’s intelligence and vigilant behavior as well as adaptation ability is one of the interesting facts about German Shepherds.

The range of the price varies depending on the pure breed. If they are pure German blood directly from Germany, they are tagged with $4000.

These facts about German Shepherds express the nature and characteristics of the breed. GSD is still considered a talented and intellectual breed and used in armed military operations and camps.

They have a gene of the working dog breed and can communicate with humans easily. GSD is one of the popular breeds all around the world, with a population of 3.4 million only in the USA alone.