Honey badgers are listed in the Guinness Book of Records as the “most fearless animal in the world” as they fight with larger predators like lions, leopards, and hyenas.

There are no such fierce, strong, fearless, and stupid animals in the whole animal kingdom compared to honey badgers. These facts about honey badgers will be the most interesting and unbelievable ones that I assure you.

If they require, they can dig in to hide a place within a matter of a minute. When escape is impossible, they fearlessly attack the opponent. They are one of the fiercest animals in the world.

Honey Badger is also known as ratel. It is widely available in Africa, the Indian subcontinent, and Southwest Africa. Ratels have distribution to a wide range all over the world.

Honey Badger is the only species of the genus Mellivora. The scientific name of honey badger is Mellivora capensis. They fall under the omnivore mammals under the group Clan or Cete.

Even though they have the badger in their name but these animals don’t resemble any similarities with badgers. They represent some similarities with weasels. Honey Badger is the least concerned animal, stated by IUCN. They can adapt to any climatic conditions.

Ratels have a long body with noticeable thick broader on its back. There are almost 16 species of honey badgers in the world. Their life span is up to 7 years and size is 8 to 12 inches and weigh 13 to 30 pounds.

Honey Badgers are mostly solitary. However, during the breeding season, honey badgers hunt together. They prefer living anywhere depending upon suitable surroundings like tree trunks, ground, and mounds.

Honey Badgers are one of the kinds which are known as the fearless amongst them all. They can bear up to thousands of stings from bees to 6 or 7 stings from venomous snakes like the king cobra.

Honey badgers crave and go to any extent to have the larvae and honey. The name itself relates to the nectar. These honey badgers voraciously feed on honey and honey bees’ larvae.

Honey badgers always get associated with the honey diet. They prefer to eat highly nutritious bee brood. They tend to raid honeybee hives while searching for bee brood.

Badgers also dig the larvae of honey bees. They love honey so much that they can even tolerate hundreds of stung from angry bees.

Sometimes, researchers have found honey badgers dead after getting stung by thousands of bees.

The physicality of both skunk and honey badger are somehow similar. Apart from that, both of these creatures release some disgusting smells which keep the enemy away.

When honey badgers feel threatened or danger from any attacks, they release stink bombs through the gland at the base of their tail that produces stinky liquid

Honey badgers love burrows which is their home. They also love to catch the prey underground by digging burrows.

Honey badgers use their claws in the font feet while digging. They can dig burrows up to 9 feet long and up to 5 feet deep.

They can even make holes through different materials. Once, a honey badger got spotted digging in a parking lot, and it was able to make a hole in the underground within 2 minutes.

Honeybadger skin is thicker than most of the animals like Giraffes, Rhinos, elephants. They have at least six millimeters thick skin, which is bulkier than a buffalo’s skin, an animal that is more than 50 times its size.

It is difficult for other predators to penetrate their teeth and clause on honey badger’s skin. Having an advantage of thick skin, honey badgers can usually survive through arrows, spears, and the thick claws of other animals.

Since they get protection from their skin, honey badgers can dig in their head in the beehives for larvae. They are hard to kill with traditional weapons.

Female honey badgers have four mammary glands, two pairs of breasts with nipples which helps them to feed their cubs faster.

Females reach sexual maturity faster than male honey badgers, taking 12 to 16 months. These animals care for their infants until they turn 1-2 years old.

6. Honey Badgers have a hoarse voice

Honey badgers sound like “Khrya-ya-ya-ya.” During mating time, males produce loud and grunting sounds. Honey badgers often scream at night due to sexual excitement during the breeding season. Sometimes, they shout to warn about predators

When honey badgers come face to face with dogs, they scream like bear cubs. Their vocal receptors consist of 16 different discrete cells. They can have low pitched, long growls to high pitched squeaks and bird-like coos.

7. Honey Badger gives one baby at a time

Unlike other animals, honey badger relies on giving birth to one cub at a time. They breed no more than once in 14 to 24 months. Their breeding season is usually September to December.

Baby honey badger’s mantle is whiter than their moms. At birth, honey badgers are blind and helpless.

The females use their claws to dig a burrow to hide their babies after delivery. Cubs will gradually open their eyes after two months, within ten months, they will reach adult size.

8. Honey Badgers are the most intelligent animals

Honey Badgers have better problem-solving and analytical skills compared to other animals. They can watch zookeepers and human activities and try to do it on their own.

Honey badgers can crack eggs, stack up logs and rocks to climb. Animals using tools as a basic need for their survival is one of the crucial signs of intelligence.

Also, researchers have spotted honey badgers using sticks, mudstones, rakes, with the determination to escape from the zoo.

Hence, this shows their ability to think smartly and act accordingly. No doubt these honey badgers aren’t dumb and are intelligent mammals.

Honey Badgers are carnivores and have only a few natural predators and are stubborn. Ratels have a fair hearing but an excellent sense of smell. 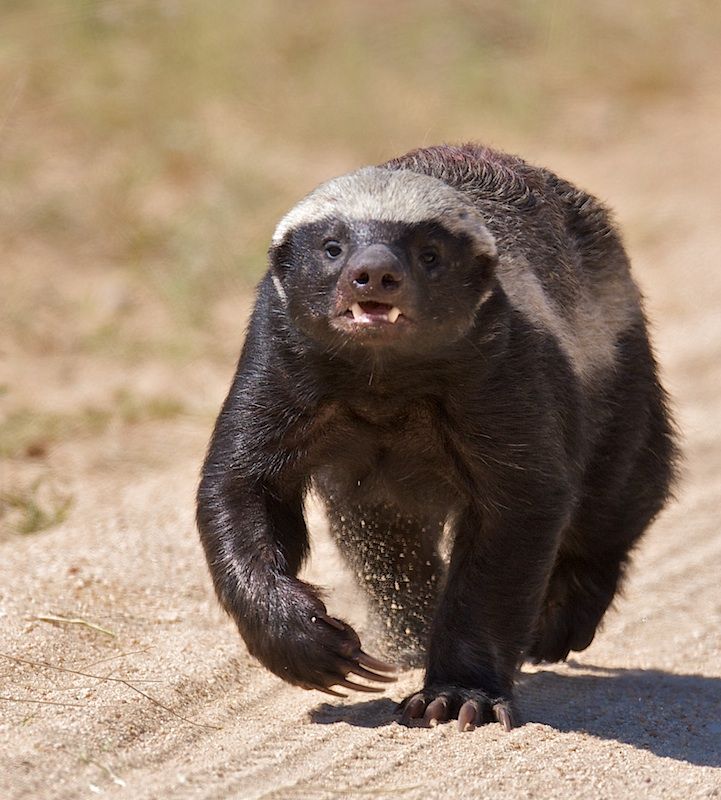 However, they also feed on other big animals like reptiles, crocodiles, rodents, lizards. As well as highly venomous cobras, black mamba, pythons.

Honey badgers are renowned for their toughness, strength, and ferocity. Anyone who knows cannot deny the facts about honey badgers being stubborn and fearless.