12 Interesting Facts about Starfish You May Not Know

Starfish doesn’t seem to love any freshwater environment, which is quite odd in marine creatures. As mentioned in the name “Sea Stars,” they are found around the sea and seashore to feed their prey. Also known as Sea Stars, let’s dig deeper into the interesting facts about starfish.

Starfish is a star-shaped marine fish belonging to the phylum Echinodermata. Echinoderms first got traced in the fossil record in the Cambrian.

Starfish have tube feet, and their body gets operated by a hydraulic system, also known as the water vascular system.

Starfish resides in an intertidal zone or seashore to deep down abyssal. They can live in the sand deep down up to 8000-9000 meters.

Starfish are available in all the oceans present in the world, from tropics to frigid polar waters. They love to stay around tidepools, seagrass, deep-sea, and kelp forests.

Starfish’s average lifespan is 35 years and weighs up to 11 pounds. The closest relatives of starfish are sand dollars, sea cucumber, and sea urchins.

Starfish have a complex life cycle as they can reproduce both sexually and asexually. Many starfish facts are there to reveal its nature and abilities.

Starfish are marine invertebrates that have five arms and central discs. Their body is arranged around the central axis, having five-point radial symmetry. 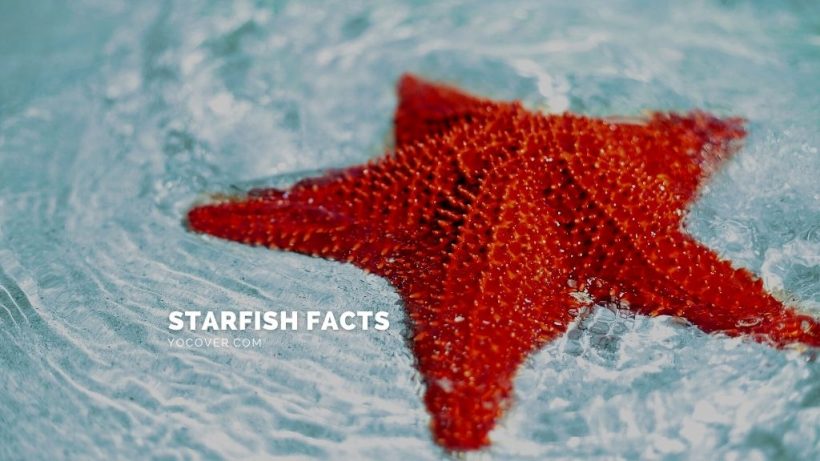 There is no right and left half, but it is the top and bottom side in Sea Stars. Here are some interesting facts about starfish.

1. Starfish is not a fish

Due to the absence of anatomical structures like fins, gills, or scales, starfish are not considered fish. The movement or locomotion of the starfish is different from fish.

According to research, starfish are called sea stars as they don’t fall in the class of fish—they breathe through the papules on the surface of their body.

These starfish facts explain being marine creatures, they don’t fall under the classification of fish, and most of us are unaware of it.

2. Starfish do not have a nervous system

Starfishes are beautiful marine creatures. They don’t have a nervous system to operate their bodies. The creature without the nervous system able to sustain itself in the ecosystem is one of the fascinating facts about starfish.

How do they operate?- Starfish have a single circular mouth that gets connected to each arm via a radial nerve. The neurons present in their body stimulate muscles to each of its tube feet.

3. Starfish are brainless and boneless

Starfish has no brain and no bone. In the absence of a centralized brain, starfish have a complex nervous system that makes them feel any pain.

They also can plan actions and can use defensive tactics when they sense danger.

The sensory receptors and their setup allow starfish to feel and make decisions regarding their survival, including finding food to avoid danger.

4. Starfish have an eye on each arm

Starfish have eyespot on the tip of each arm that are light-sensitive pigments. These pigments allow them to see and feel light and darkness in their surrounding. Starfish are colorblind as they are unable to differentiate between colors.

Starfish are marine animals as they are born to survive in marine water only. They cannot live in freshwater, but some species of starfish can live in brackish water.

They cant survive in freshwater due to changes in salinity. When dropped in fresh water, they cannot resist the unstable state between their body and freshwater.

They live in a state of isotonic stability in general. Isotonic balance means to have a balanced amount of water moving between body tissues and saltwater. Instead of blood, starfish pump nutrients through their bodies via a water vascular system.

The mouth of the starfish is located at the center of its lower surface. Starfish feet have suction cups on the bottom and hold on to their meal.

They latch their tube feet on the shell of their hunt, then pry the outer cover open just enough for them to reach to the stomach. Starfish stomach comes out of its mouth and approaches the meal, and pulls it back inside.

Sea star’s diet depends upon the species present in the sea. Many include invertebrates in the seafloor, mostly dependent on sponges, bivalves, corals, algae, and urchins.

Starfish can digest their food outside the body. They can take several hours to digest their prey and display of the unique mechanism of feeding is interesting.

The extraordinary ability to regenerate or reproduce their limbs. In some cases, they can even regenerate the entire body.

Some species require the central body to be active for regeneration, whereas some can form a new starfish from a single or piece of a severed limb.

If you cut a starfish radially into five parts, it can regrow or regenerate itself from every five parts and form a new starfish.

Before regeneration, the amputated part or organ must go through a repair phase to heal the wound.

9. Starfish is protected by armor

Starfish have spiky shells that help them to protect themselves from their predators. Predators of starfish are sea otters, birds, fish, and last but not least sharks love sea stars as their food.

Starfish have a tough covering on the upper side of their body. The upper surface of some starfish can be smooth, as well as overlapping plates and granular roofs.

The armor got made from plates of calcium carbonate. It also has tiny spines on its surface. One starfish having numerous spikes on its upper part is also known as the crown of thorns starfish.

They can reproduce both sexually and asexually. The asexual reproduction of starfish undergoes fission or through the autonomy of arms.

During fission, the central disc of starfish breaks into two pieces. Through those pieces, new missing parts get regenerated.

Asexual reproduction can be releasing lava before maturity when starfish get plenty of food supply from their surroundings. By doing so, they can ensure more offspring will survive.

Their sexual reproduction is in the form of spawning, where sex cells get released into the water. Male starfish releases the sperm and female releases egg in a vast number.

Later, the fertilized embryo becomes free-swimming starfishes. Starfish can change their sex from male to female and vice versa whenever they want.

Among 2500 species of starfish, some of them have more than five limbs. They are beautiful marine animals having different colors, shapes, and structures.

Some species can even have 10, 20, and 40 arms. One of the species of starfish known as “Luidia Senegalensis” has nine limbs.

These species are present in deep water up to 40 meters and around Florida, the Gulf of Mexico, Caribbean Sea. They prefer muddy, sandy sea beach locations such as lagoons.

They can even live in the sand as deep as 20,530 feet without any hesitation. They aren’t social creatures but can congregate in large groups during certain times of the year for feeding purposes.

These animals are available in all ocean basins and a large assortment of depths and bottom compositions. However, starfish are benthic animals.

In conclusion, survival is vital for every creature, and they utilize what they have. These are some interesting facts about starfish stating how the brainless, boneless and animals without a nervous system can fight for survival.