Peacocks are one of the most beautiful creatures on earth. The presence of huge tail and distinctive patterns on feathers makes them more fascinating. Peacocks also have a very distinct eye pattern.

Peacocks possess unique anatomy, which makes them beautiful birds. Peacock is a national bird of India and has many cultural values. “Peacock” is a general term that refers to birds of both sexes. Technically, peacocks refer to the male birds, and peahens refer to female birds, collectively they are called peafowls.

Peacocks are generally ground-dwelling birds and commonly found in farmlands and forests. It is native to Asia. There are three species of peacock namely Blue peacock, Green peacock, and African Congo peacock. Two of these originate in Asia and the other is of African descent.

The population of the peacock is declining due to habitat loss and hunting. While peacocks are not considered an endangered species at the moment, the Congo peafowl, in particular, has been listed as vulnerable.

1. Only Male Peafowls Have Ornamental Feathers

Beautiful and colourful tails are characteristic of male peafowl. On the other hand feathers of female peafowl are somewhat brown or grey. This striking colour combination differentiates male and female fowls.

The large train is used in mating rituals. Tail feathers have eye-like spots surrounded with green, blue feathers. A peacock can flaunt up to 200 feathers on its tail at a time.

Despite their heavyweight and long train, peacock manages to fly. But they only cover short distances. Generally, peacocks fly to escape from predators or for their night roost. Since peacocks are ground-dwelling birds, they prefer running to flying.

Peacocks can also run at a speed of 16 km/hr, which is pretty fast than other terrestrial birds. These birds weigh between 8-13 pounds and are almost five feet long. Only the tail makes up 60% of the peacock’s total body length.

3. Peacocks Are Not Born With Fancy Feathers

Peacock feathers are called trains. Peacocks are not born with fancy tail feathers. The process of growing their feathers only starts after the age of three. It is harder to distinguish the sex of the bird because they are nearly identical. Peacocks shed their train every year after the mating season.

Adult peacocks use the bright train to impress female fowls and attract as many females as possible. A peacock shows their beautiful feathers mostly during spring, which is also the breeding season.

Peacocks are omnivorous birds. They feed on fruits, seeds, flowers, leaves, insects, ants, butterflies, etc. Grains are the most common food of peacock as they are ground-dwelling birds.

Peacock also feeds on some amphibians and reptiles like a snake, lizard, etc. Peacocks are also known for chasing snakes. Peacock fights with snakes, even with poisonous ones like cobra and prey on young ones. Peacocks are terrestrial feeders.

Peacocks are social birds and like interacting with humans. The domesticated ones interact with humans pretty well. Peacocks also indulge in various games with each other, like chasing around. Peacocks do not like being alone, and they always go in groups which usually have 8-10 birds. However, they form a group of their kind and do not approve the entry of outsiders in their group.

Peacock makes unpleasant screeching sounds and is often regarded as the loudest creature. During the monsoon, the frequency of their sounds increases and indicates the upcoming rainfall. Peacocks can make 11 different sounds. A study found that peacocks make sounds to attract peahens.

Peacocks make a low pitch sound whenever they shake their tail in a particular way and the human ear cannot perceive those sounds. Peacocks make a loud noise when they feel threatened and also during mating season

Peacocks are polygamous which means the male fowls have more than one partner in the wild. They have a minimum of two and can have as many as 4/5 female partners. Peacock usually forms a harem (a group of peafowls) which consists of 2-5 females. Due to this polygamous nature, the left out peacock feels sad and is heart-broken.

In Hinduism, the peacock is co-related with Goddess Saraswati and considered as a sacred bird. The circular spots on the tail symbolize the eyes of God. It also stands for knowledge, kindness, and compassion. In Christianity peacock represents everlasting life.

Peacock uses their sleekly feathers to attract females i.e. peahens. They also perform some kind of dance to fascinate females. Peahens lay around three to six eggs usually between January and March. The females incubate the laid eggs and young birds hatch in about 28 days. Most peafowls reach sexual maturity at age three. Peahens are one of the clever birds as they lay unfertilized eggs far away from their nest to distract the predators.

An average lifespan of peacocks is 15 to 20 years in the wild. Peacocks are domesticated throughout the world and peacocks are an essential part of the zoo. Peacock can live up to 40-50 years when they are kept under captivity. One of the major reasons behind shorter lifespan in the wild is the presence of predators like tigers, raccoons, wolves, dogs, etc.

Peafowl which has all-white feathers comes into existence through the process of selective breeding. Genetic mutations cause loss of pigmentations. They lose the ability to create any coloured pigment which is known as leucism. However, the bird retains standard eye colour along with leucism.

For more than 2,000 years, peacocks have been kept in captivity around the world. Peacock is an essential part of the zoo, as it attracts many peoples through its beauty. The most common type of peafowl found in zoos and parks in the Indian peafowl. Peacocks are domesticated either for entertainment purposes or religion. People also domesticate them for their ability to catch snakes.

13. Colours of a Feather 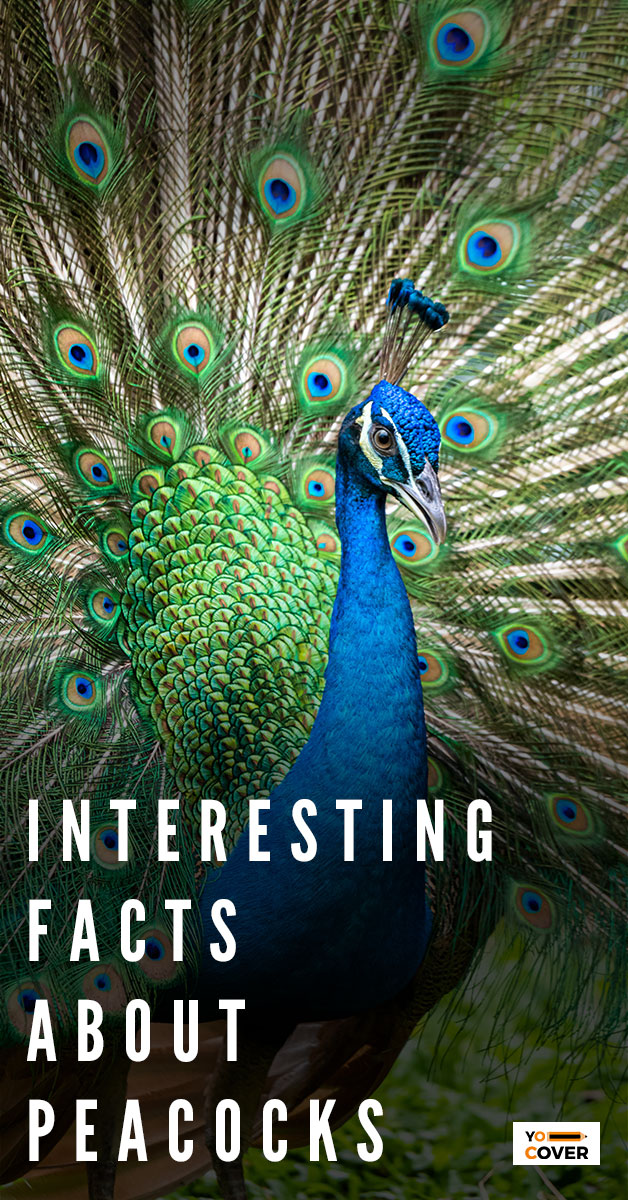 18 Astounding Facts About Bees Hardly Ever Heard Of